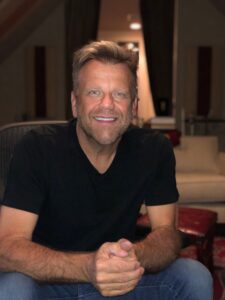 Wendell Lee Mobley was born in Celina, Ohio. He is an American Country Music Singer-Songwriter. He has written # 1 hits for Rascal Flatts and Kenny Chesney.

He began playing in local bands before moving to Nashville, Tennessee, where he found a job playing guitar for Jack Greene and Alabama. After having his songs recorded by Joe Diffie and Kenny Rodgers, he became a full-time songwriter.

Mobley’s first cut as a single was Alabama’s “We Can’t Love Like This Anymore” in 1994. Among his cuts are the # 1 singles “How Forever Feels” and “There Goes My Life” by Kenny Chesney, “Fast Cars and Freedom”, “Take Me There”  and “Banjo” by Rascal Flatts and “How Country Feels” by Randy Houser.

There’s a good chance you have heard Wendell’s songs, but if you have not heard him sing and play them, you should!

He also wrote and sang all those ridiculous NAPA Know How commercials. His latest single “A Little More Summertime” recorded by Jason Aldean is also a # 1 hit.